Eixample District was a planned expansion of Barcelona during the 19th and 20th centuries. You will be amazed by the treasure-trove of Modernisme style buildings by famous architects such as Antoni Gaudí. In other districts within gallery two are landmarks ranging from a medieval church to a geyser-shaped skyscraper. 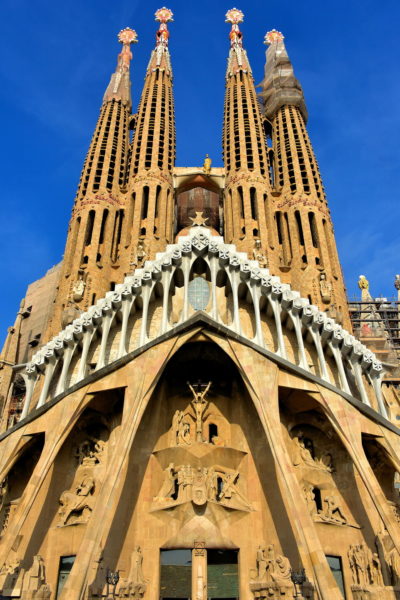 1 Sagrada Família by Guadí in Eixample District in Barcelona, Spain

Barcelona is best known among architecture aficionados for the Modernisme Movement and its master, Antoni Gaudí. The famous architect’s pièce de résistance is Sagrada Família. Construction of the minor basilica began in 1882. The estimated completion date is 2026 – one hundred years after Gaudí’s death. Crowds of tourists come to stare at the enormous spires at this UNESCO World Heritage Site. The tallest tower of the 18 planned will be 560 feet tall. 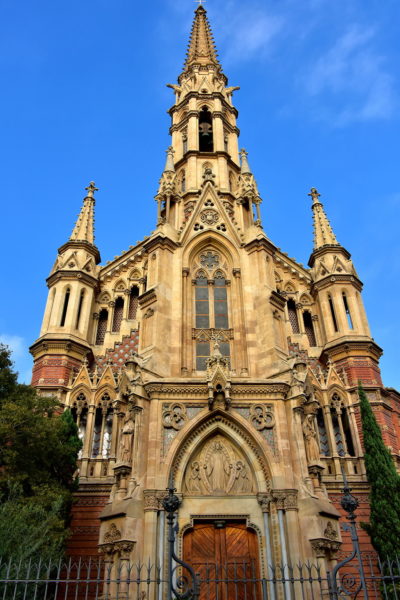 2 Church of Saint Francis of Sales in Eixample District in Barcelona, Spain

The Salesian sisters from the Order the Visitation of Holy Mary founded a convent in Barcelona in 1874. Eight years later, they commissioned Joan Martorell i Montells – an architect who taught Antoni Gaudí and hired him as a draftsman – to build the Salesas Church in a Neo-Gothic style. Parròquia de Sant Francesc de Sales is located on a street named Paseo de San Juan. 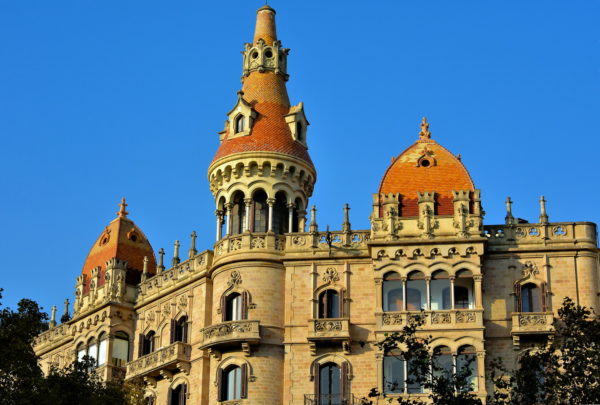 At the turn of the 20th century, architect Josep Puig i Cadafalch was commissioned by three Terradas sisters to convert their bland residential buildings into a fanciful, Medieval castle. He collaborated with skilled artisans to create Casa Terrades on Avinguda Diagonal. This expression of Modernisme design features six, red-tile towers giving it the popular name of Casa de les Punxes (House of Spikes). 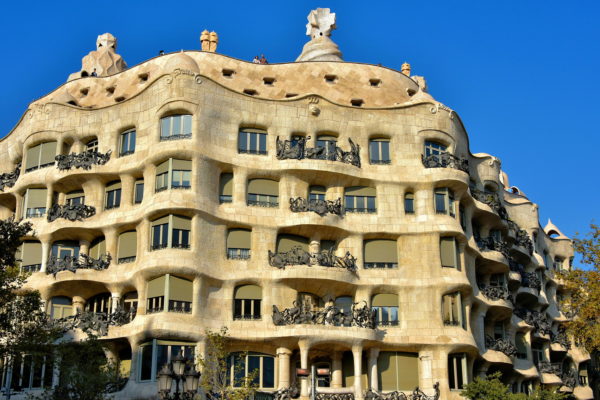 4 Casa Milà by Guadí in Eixample District in Barcelona, Spain

When Antoni Gaudí received his architect degree in 1878, the school’s director proclaimed, “We are giving this academic title to either a fool or a genius. Time will show.” When standing in front of any of Gaudi’s seven Barcelona buildings designated as a World Heritage Site, people claim both predictions came true. Gaudí was the master of Catalan Modernism. This exaggerated version of Art Nouveau is characterized by asymmetrical curves, dramatic shapes and ornate decoration. A classic example is Casa Milà. This last residential project by Gaudi was built in 1910 as a home for Pere Milà. 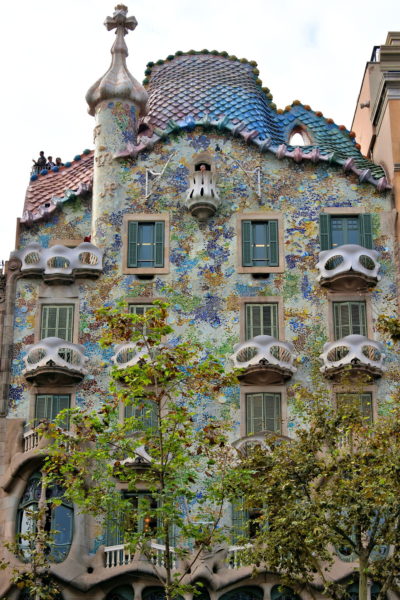 5 Casa Batlló by Guadí in Eixample District in Barcelona, Spain

Most of Antoni Gaudí’s architectural projects were designed from the ground up. Casa Batlló, along the boulevard Passeig de Gràcia, is an exception. The famous architect used an existing building from 1877 as his canvas for Catalan Modernism. Owner Josep Batlló i Casanovas gave Guadí full license to express his creativity. The results feature a colorful mosaic facade, balconies resembling theater masks, a roof with reptile-like scales and a turret claimed to be the lance of Saint George of Lydda. Casa Batlló is a UNESCO World Heritage Site in the Eixample District. 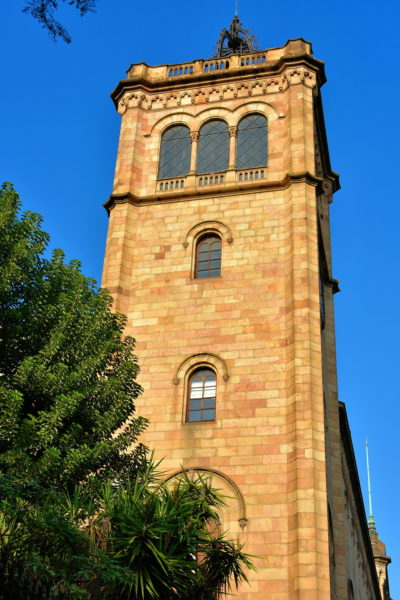 6 University of Barcelona’s Historic Building in Eixample in Barcelona, Spain 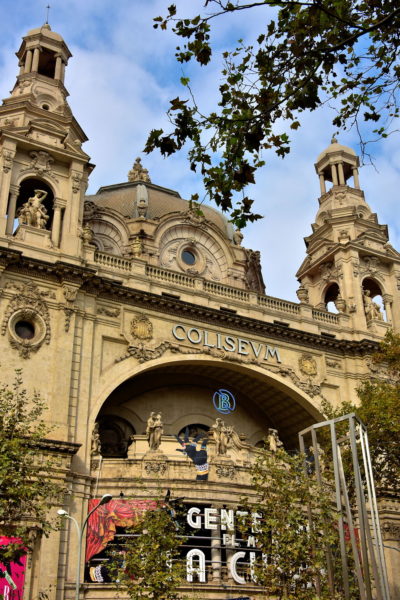 From the early 1910s through the 1920s, movie palaces became the rage in Europe and the United States. They were characterized by opulent and luxurious features inside and out. Architect Francesc de Paula Nebot created Barcelona’s version in a Modernisme style. The Coliseum was extremely popular when it opened on Gran Via in 1923. Paramount Studios owned it until 1939 when the Golden Age of Cinema was peaking. Teatre Coliseum is now a combined theater for movies and stage productions. 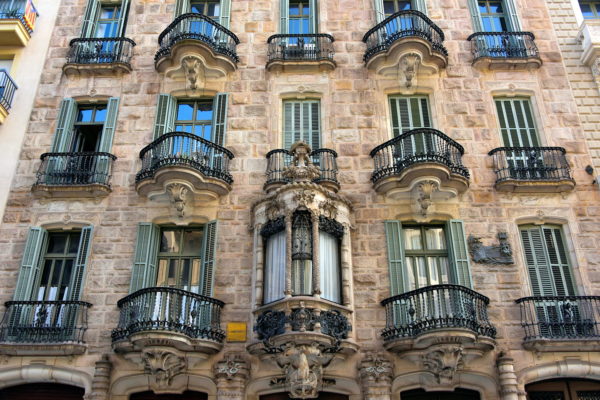 8 Casa Calvet by Guadí in Eixample District in Barcelona, Spain

Even if you are very familiar with Antoni Gaudí’s architecture, you probably will not recognize this façade at Carrer de Casp 48 as one of his works. The design is more symmetrical and tame – resembling an Art Nouveau design – versus the Catalan Modernism style that made Gaudí famous. Casa Calvet was built in 1900 in the Eixample neighborhood as the headquarters for the Calvet textile manufacturer. On the upper floors were living quarters for the founder’s widow and family. 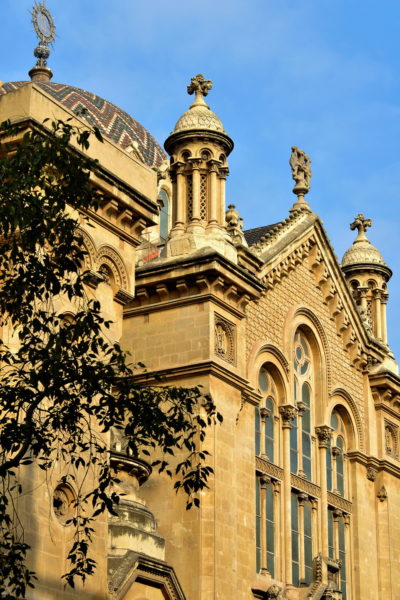 Church of the Sacred Heart of Jesus is a Roman Catholic church in the Eixample District on Caspe Street. Construction of the Neo-Byzantine structure designed by Joan Martorell began in 1883 and ended six years later. Església del Sagrat Cor de Jesús should not be confused with the opulent Cathedral del Sagrat Cor located on Mount Tibidabo. 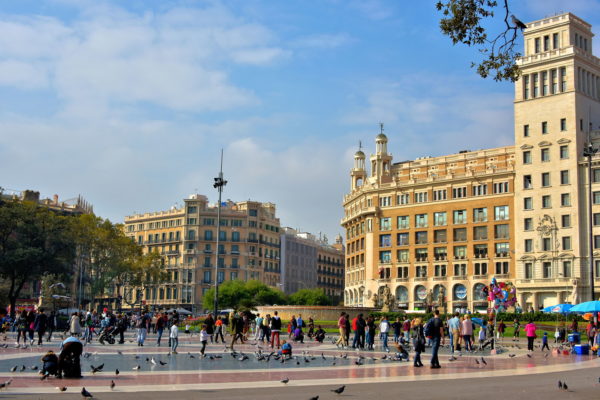 Plaça de Catalunya is a 12.5 acre square at the conflux of ten major streets including La Rambla and Passeig de Gràcia. Half of the plaza is in the Ciutat Vella District while the other half is considered to be part of the Eixample District. Plaza Catalunya is encircled with restaurants and hotels plus the city’s main shopping district. The large oval center is typically crowded with people and pigeons. 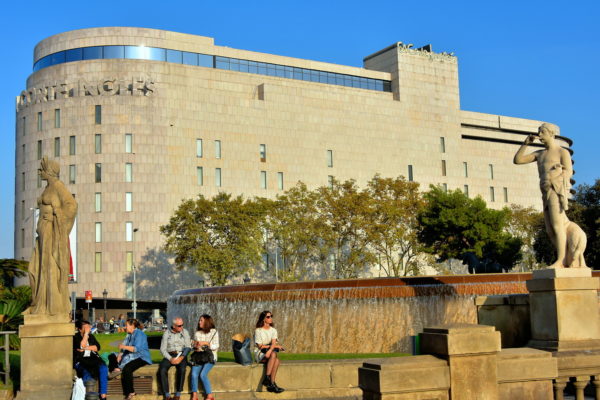 Anchoring one border of Plaça de Catalunya is El Corte Inglés. This branch of Europe’s largest department store carries 86,000 square feet of merchandise. Even if you are disinterested in shopping, consider eating at the La Rotonda restaurant on the ninth floor. Spectacular views of the city are served with every meal. The people in the foreground are enjoying a quiet respite along the square’s fountain decorate with statues. On the right is Pastor de Pau. The Peaceful Shepard was created by Spanish avant-garde sculptor Pablo Gargallo. 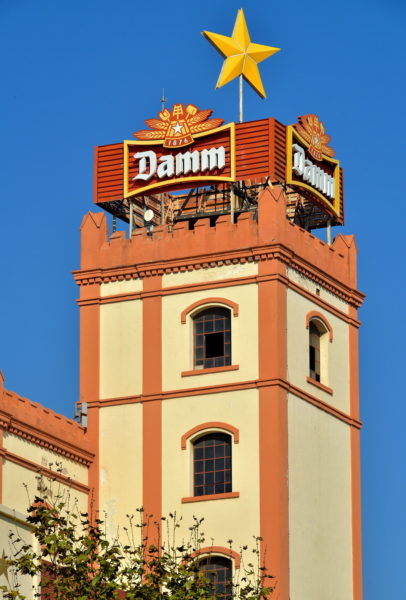 In 1876, August and Joseph Damm founded Sociedad Anónima Damm, better known as S. A. Damm. Their first product with a yellow star was a pilsner lager named Estrella Damm. The beer is still one of the favorite ways to quench a thirst in Barcelona. Antigua Fábrica de Damm was their brewery from 1905 until 1992 and still is the company’s headquarters. Among the museum exhibits is the history of this popular Spanish beer. Why wouldn’t you want to visit a brewery whose name translates to the Old Damm Factory? 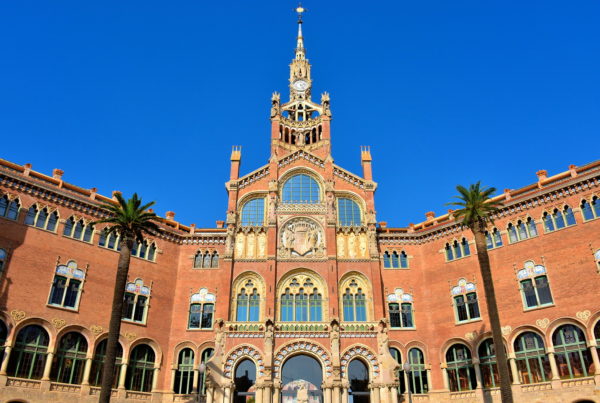 In a city filled with spectacular architecture, you will be tempted to pass on seeing an early 20th century hospital. Don’t miss visiting this UNESCO World Heritage Site named the Hospital of the Holy Cross and Saint Paul. The exquisite example of Art Nouveau was designed by Lluís Domènech i Montaner, the prolific and gifted architect who was also responsible for Palau de las Música Catalana and Castell dels Tres Dragons. This visual gem in the Eixample neighborhood is north of Sagrada Família. The 30 building complex has been a museum and cultural center since 2014. 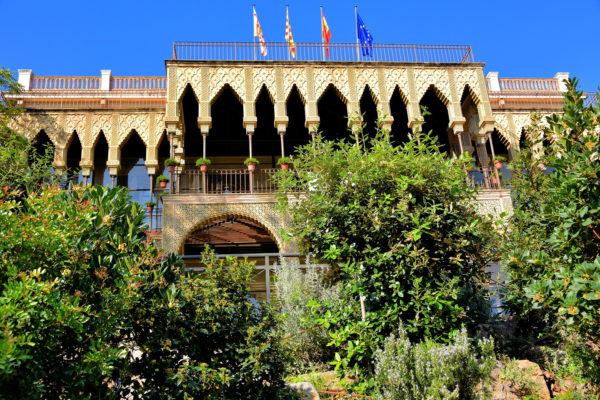 Moorish architecture is evident in many cities in Spain. But Neo-Mudéjar – a form of Moorish Revival – is rare in Barcelona, a notable exception being the Arc de Triomf. Casa de las Alturas was built in 1890 as the residence for the director of the General Society of Water. Since 1989, it has been the Municipal Council’s headquarters for Horta-Guinardó, one of Barcelona’s ten districts. 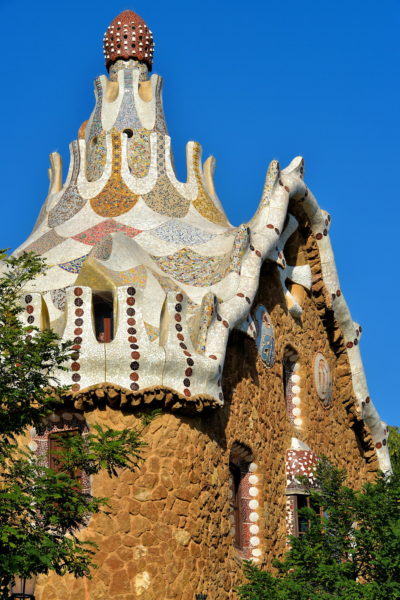 This pavilion resembling a gingerbread house is one of two at the entrance of Parc Güell. The park’s namesake is Eusebi Güell. He was a wealthy industrialist who commissioned architect Antoni Gaudí for several projects including his residence and garden that was supposed to evolve into a community for the rich. Since 1923, the property has been Park Güell. A stroll through this park is an experience in visual flamboyance. The popular tourist attraction has been designated as a UNESCO World Heritage Site. 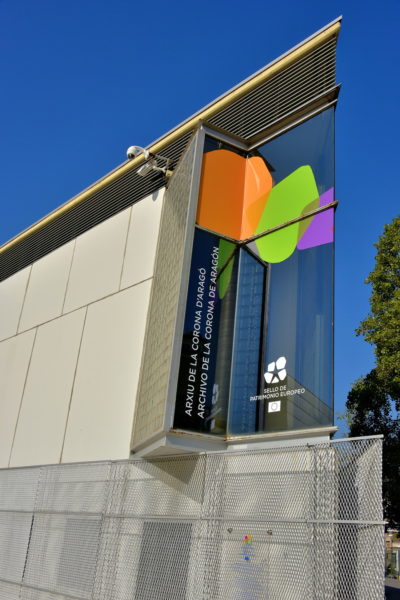 16 General Archive of the Crown of Aragon in Eixample District in Barcelona, Spain

The Crown of Aragon was a composite monarchy which began in 1162 and ended in 1716. One king ruled over several political territories (similar to states). At its height, the geography covered present-day southern Italy, eastern Spain and several Mediterranean islands. An archive for the Crown of Aragon was founded in 1318. Since 1994, the General Archive function has been headquartered in this building on Almogàvers Street. The Ministry of Education organization maintains documents dating back to 844 AD. 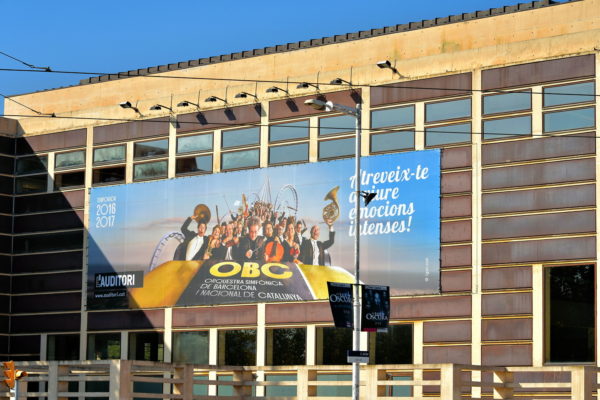 Since opening in 1999, L’Auditoti has specialized in musical performances within its three salas (halls). The complex is also home to the Barcelona Symphony and Catalonia Orchestra, the Catalonia College of Music and the Music Museum of Barcelona. This concert hall building – designed by acclaimed architect Rafael Moneo – is a short distance from the National Theatre of Catalonia in the Eixample District. 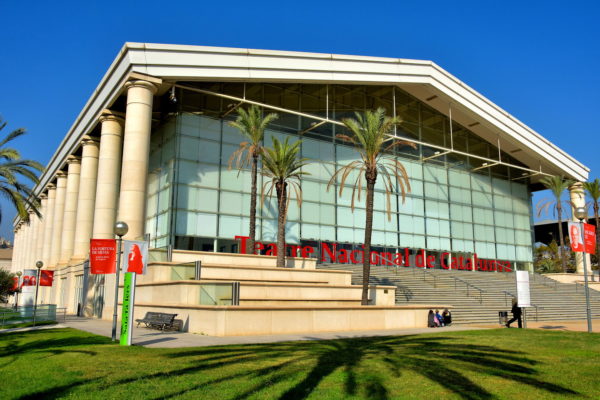 18 National Theatre of Catalonia in Eixample District in Barcelona, Spain

The National Theatre of Catalonia is a performing arts venue. The TNC opened in the Eixample District in 1996. Most of their performances are conducted in the Catalan language while others are in Spanish. The Post-Modern design by Ricardo Bofill features a glass façade surrounded by 25 columns measuring 39.5 feet tall. The greenspace in front is Plaça de las Arts. 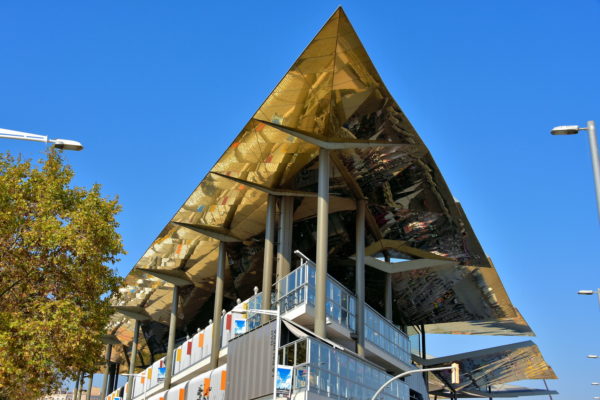 A popular outdoor flea market named Els Encants Vells was in the Sant Martí District since 1928. During the revitalization of a square named Plaça de les Glòries, the market was moved in 2013 to make way for modern construction such as the Torre Agbar. This is the new Enchants Market located in the Eixample District. Under this reflective, open-air canopy designed by Fermin Väzquez are 500 vendors peddling every imaginable kind of used stuff. 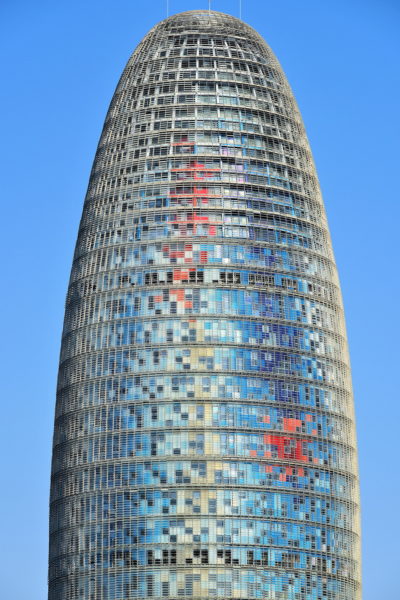 This bullet-shaped skyscraper in the Sant Martí District was named Torre Agbar when it opened in 2004 as the headquarters of Grupo Agbar, an international water treatment company. Architect Jean Nouvel claims his design resembles a geyser. The unique, 472 foot façade features 4,500 windows with temperature-controlled levers and an equal number of LED lights that illuminate at night. Barcelona’s third tallest building was renamed Torre Glòries in 2017 after the office high-rise was purchased by Merlin Properties. 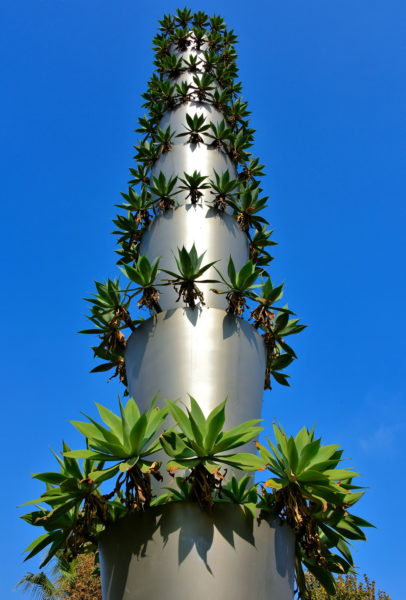 El Poblenou was the center of Barcelona’s industry and factories until the early 20th century. Extensive efforts continue to revitalize the neighborhood. An example is Parque del Centre del Poblenou. The 14-acre, triangular park was designed by French architect Jean Nouvel and opened in 2008. It features over 10,000 Mediterranean trees, shrubs and plants. Some climb the outer walls, others stand randomly among the concrete and a few grow from unique metallic sculptures like this one called The Ramos. There is also a chimney of an old factory to remind park goers of El Poblenou’s past. 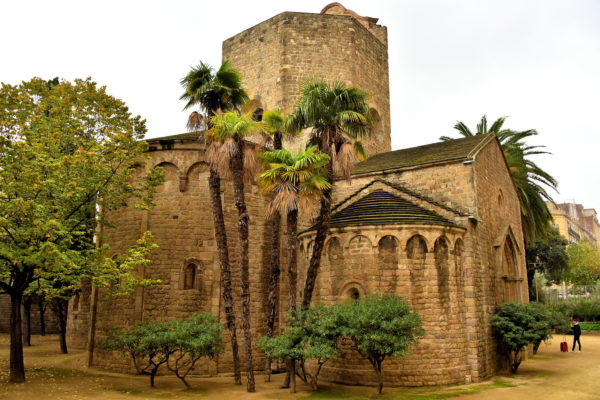 Wifred II, while the Count of Barcelona from 897 until 911, is believed to have founded the Sant Pau del Camp monastery. The original church dates from 977. It was replaced during the 13th century with this Romanesque chapel standing in the El Raval neighborhood of the Ciutat Vella District. 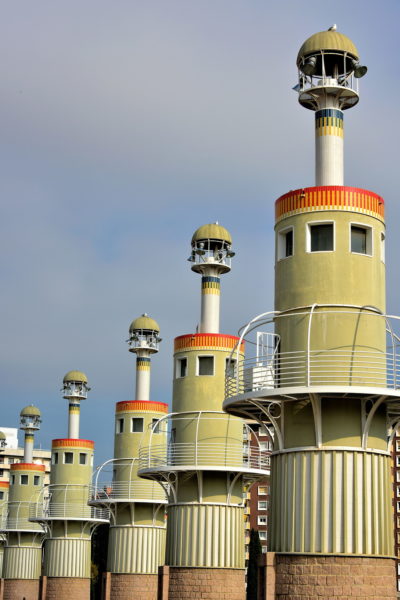 In 1851, a cotton factory called Industrial Spain was built in the Sants-Montjuïc District. After the successful company moved in 1972, their plant was renovated into the Parc de l’Espanya Industrial. This is a residential complex embellished with a lake, sculpture garden and family park. These are five of the nine identical towers lining the San Antonio Promenade.

Since Camp Nou opened in 1957, the sports facility has been the home of the Futbol Club of Barcelona, the city’s professional football team and the world’s second most valuable sporting franchise. With a seating capacity of almost 100,000 people, New Field is Europe’s largest sport’s venue. If you count when 121,749 fans watched the 1982 FIFA World Cup, then Camp Nou was the biggest stadium on the planet. 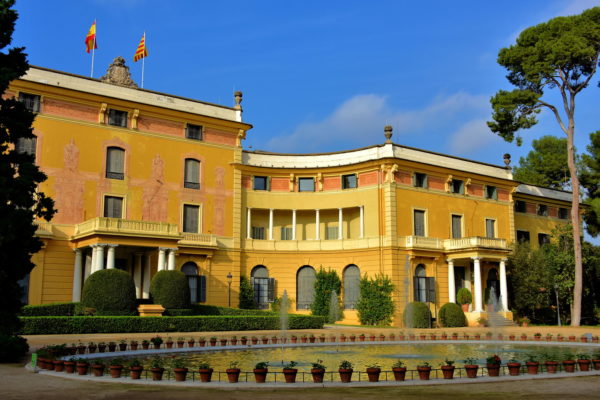 In 1862, Eusebi Güell – the wealthy entrepreneur who sponsored Park Güell – purchased a 17th century farm named Can Feliu. He then hired Joan Martorell i Montells to convert it into an estate. In 1918, Güell gifted the property to the Spanish monarchs. Within six years, it was remodeled into the Pedralbes Royal Palace. This is where the Royal Family resided during their visits to Barcelona until 1931. Palau Reial de Pedralbes now serves as three museums dedicated to ceramics, textiles/clothing and interior design. Equally worth enjoying is the 7.5 acre garden. Among the delights are flocks of green parrots fluttering among exotic Mediterranean trees.